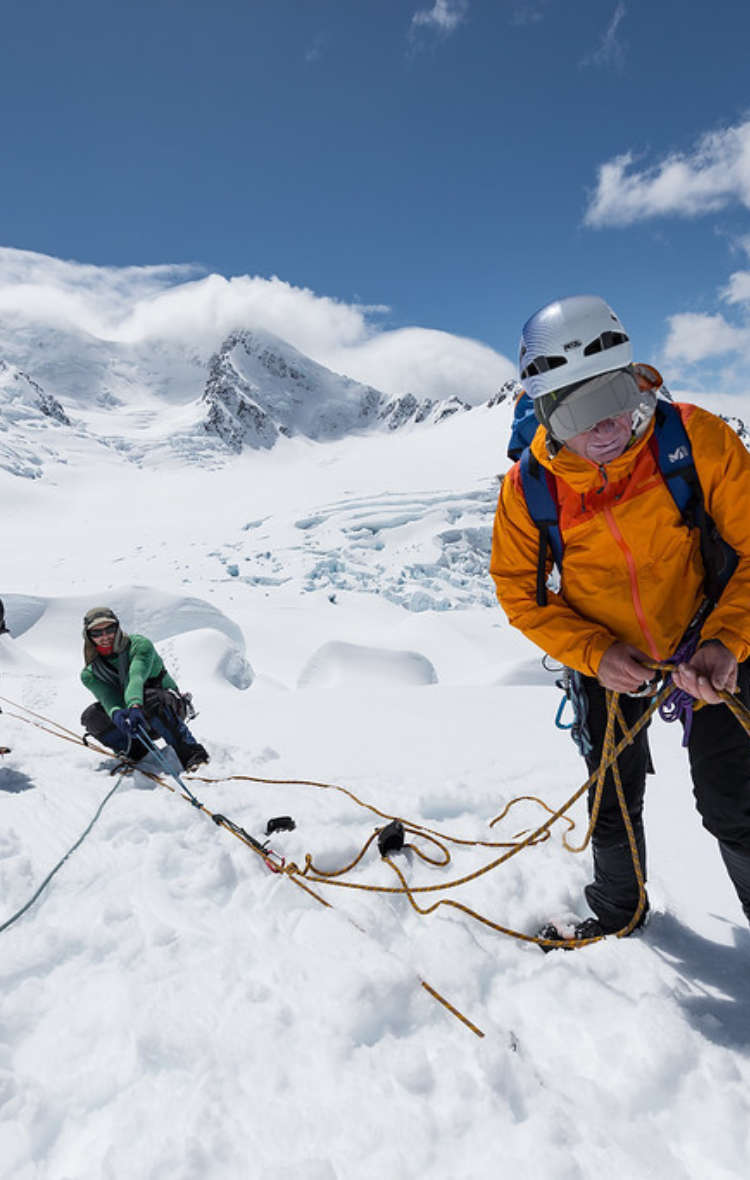 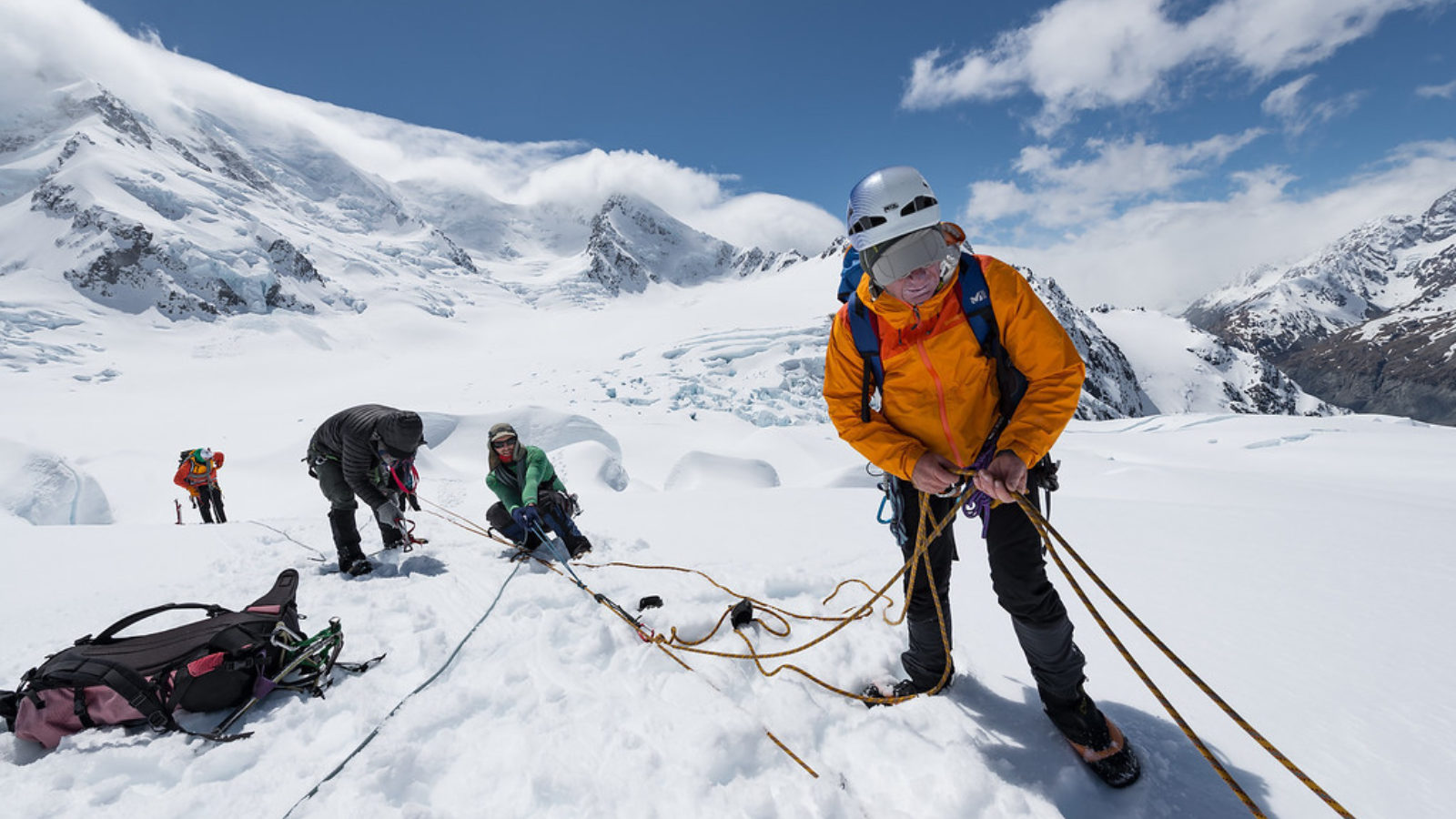 Recently I was invited by Aspiring Guides to shoot and participate in a seven-day mountaineering course in New Zealand. Based in Wanaka, Aspiring Guides is a local outfit that offers mountain guiding and quality training in the peaks of the New Zealand Alps. When they called me at the last minute with one spot left, I jumped on it.

I’ve been wanting to learn more about mountaineering for ages, but living so far away from big mountains makes it difficult to learn the ropes. I’ve read books about mountaineering techniques and have friends who could teach me, but I wanted to learn from the pros. I didn’t want my friends to be responsible for my training, and I knew that reading something in a book doesn’t mean you can do it in the field. Even though I knew I could probably take my climbing and ski-mountaineering experience and wing it, I really wanted to get a good foundation from people who know.

I’ve seen some dodgy situations shooting in the mountains. People who don’t know they’re in a dangerous environment, let alone have any idea of what they’re doing and that it could be unsafe. All just to get a shot. When I take photos of the outdoors I want to inspire people to get outside and see the world, but also to understand the environment, and respect it.

Wanaka is one of those towns that never leaves you, and driving down the Crown Range into Wanaka brings back some pretty fond memories for me. It kind of feels like coming home every time I make my way back to this amazing place. When I was 19 I spent a season living in Wanaka, riding at Cardrona and Snowpark, and I got hooked on the mountains. In Australia I climb and canyon all the time, but there’s something different about climbing summits in the mountains. Ever since that first visit I’ve been doing everything I can to get back to NZ whenever I can.

Wanaka is rapidly changing and growing but the character seems to remain the same. I think that’s why it appeals more to me than neighbouring Queenstown. It’s still got that small ski town vibe.

I spent the first couple of days catching up with old friends and re-exploring the surrounding areas (making friends with chickens).

From the get-go Aspiring Guides were honest and open about what they hoped to gain from having me along, and what I would get in return. They gave me a rundown of what we’d be covering in the course and I already knew some of it, which increased the amount of time I’d be able to shoot.

The first day of the course we had a rope skills refresher with our guides Whitney and Gianni in Wanaka, before driving north to Mt Cook. It made sense to drill home some of the basics in a comfortable environment, before getting distracted by cold hands and driving snow. It also meant we got to drink good coffee and introduce ourselves to each other properly before heading to the mountains.

The drive up to Cook was amazing as always, it’s just a classic. Winding up through Linda’s Pass is a must no matter what you’re doing in New Zealand.

The flight into Plateau Hut is ridiculous. Plateau Hut is cantilevered out from the bedrock hanging over the Hochstetter icefall. It’s a pretty impressive hut all on its own, but add its amazing position and it’s one the coolest places you can stay. It’s also a hive of activity, with multiple groups there attempting different objectives. One group was planning to ski Cook, but unfortunately, they weren’t able to attempt the line they wanted to ski due to snow conditions. Even so, planning that line is amazing all on its own. I had been up to Plateau a couple of times before, but due to my limited knowledge I’d always stayed really close to the hut. I was super excited to finally have the chance to explore the surrounding areas and cross the glacier.

The first day out in the snow we headed for the Little Anzacs below the east ridge of Mt Cook. Monday had the best weather forecast so Whitney decided to make the most of it and get us right out and about. We roped up and made our way across the glacier, stopping multiple times to take layers off as we’d all under estimated how hot it was once you got going. We managed to cover a lot by lunch, going over pitching and self-arrest as well as looking at some snow conditions and learning how to walk properly in crampons.

Heading back to the hut after lunch, Whitney and Gianni decided to cut back through the glacier where there were a lot more crevasses. The plan was to start looking at suitable crevasses for a rescue scenario. Walking through the giant pillars of blue ice in the crevasses is seriously amazing. I have never been able to describe how these environments make me feel aside from, well . . . Happy.

As we made our way through the crevasse field I was on the middle of a rope shared with Carla, a manager at Aspiring Guides, and Martin, an experienced kayaker from Auckland. We were walking along when Martin turned and casually said “Dave’s gone”. I had no idea what he meant until he pointed to a hole in the snow. Dave, whilst taking in the amazing sights, had wandered slightly off the tracks and gone straight through the snow. I was on the rope behind him and it had happened so fast I didn’t even see him disappear.

We got Dave out easily. Whitney and Gianni helped set up a 2 to 1 haul whilst giving us little tasks to help out. We all laughed it off, but it definitely drove home how focused you had to be out there. It’s so easy to be distracted by something that catches your eye and get caught off guard, and the consequences can be really serious.

The crevasse rescue and self-rescue that came next were one of two of the best parts of the course. (Its not every day you get to deliberately roll into a massive dark crack in the ice!) We covered quite a few different aspects of crevasse rescue and by the end of it I felt pretty confident in my ability to get my partner out.

Ice climbing was the other thing I was hanging out to do. When I finally got the chance I definitely made the most of it, keeping everyone out in the cold well past lunch because I wanted just one more climb. I can’t wait to go back in June to ice climb and ski tour. The ice climbing already has me counting down the days.

The rest of the course consisted of us doing small ascents up behind Plateau, covering snow anchors and pitching. Snow conditions made it tough to climb anything really worth noting, and we spent most of the week reasonably close to the hut. The weather was throwing us constant curve balls, from blue bird to horizontal snow in the space of half an hour. It was a well-rounded learning experience. We got to practice new skills under different circumstances constantly, which I think was actually really valuable.

Our instructors were up with some of the best teachers I have ever had, and they made the best of some less than ideal conditions. Whitney used to own Aspiring Guides and has been a part of the New Zealand climbing community for a long time. As an instructor he knows the perfect amount of freedom to give to the students so they can learn from their own experiences without straying towards anything dangerous or overtly risky. When Whit said it was time to move you knew he meant it, yet you’d also catch him cracking hilarious jokes - directed mostly at me. Gianni’s approach was a little different, but just as effective. He is going into his second season guiding for Aspiring Guides and is a seasoned climber from Italy. In his early sixties he still climbs like a powerful twenty something-year-old, and he’s an absolute force to be reckoned with on an ice climb. He honestly made me feel extremely weak. It blew my mind. I found both of these guys pretty inspiring, and they are part of the reason I got even more hooked than I first thought I would. Not only are they amazing guides, but they can also cook a mean meal, and they know when you need a bit of chocolate to cheer you up.

From a photographic point of view the trip well exceeded my expectations. I knew a lot of the course would be outside the traditional windows for good light, so I didn't expect to get to many shots during the day. But the mountains delivered. Even though the blustery weather wasn’t perfect for climbing, it was awesome for shooting. The light was constantly changing, and with the clouds acting as giant soft boxes we had amazing conditions.

There was one afternoon that will stay with me for a very long time. Coming back to the hut there was a few seriously impressive lenticular clouds hanging around over the snow-capped peaks. Normally getting excited that far out from sunset is a waste of time - normally come sunset the clouds vanish, but as dusk drew closer and closer the clouds seemed to hang around and I started to pace around the hut. After a quick dinner I managed to drag Whitney and Martin back out to the crevasses. The next few hours were possibly the most amazing conditions I have ever shot in. Mt Cook backlit, gaping crevasses and huge glowing yellow lenticular clouds. You seriously can’t get much better than that. I was literally bouncing around my snow anchor.

Leaving Plateau Hut is always tough, and after such an educational week I found it especially hard this time.

This course has given me the necessary tools take on more adventures, but more importantly than that, it’s given me the tools to problem solve when things don’t go to plan that one time out of every hundred. And that’s worth more than any course. These guys have a huge amount of knowledge so it was a privilege to let them reduce my learning curve. I can’t praise Aspiring Guides enough for my time with them and I thoroughly look forward to the next adventure with them.

I would also like to throw a huge thanks to Lake Wanaka Tourism for getting me back to Wanaka to start with.